Although SAP has promised the maintenance period for the core applications of SAP Business Suite 7 until 2027 with subsequent extended maintenance even until 2030, one thing is certain: there will be no way around S/4HANA. Because S/4HANA is the architecture and platform of the future for SAP customers. But probably the most pressing of all questions for SAP customers remains: how do you migrate your existing system optimally to S/4HANA in order to take advantage of the many possibilities offered by the new platform? And what happens to investments already made and to third-party systems?

SAP S/4HANA is SAP’s intelligent business suite for the next generation. Based on proven best practices and automation through artificial intelligence, S/4HANA enables the transformation to the digital enterprise. This gives companies the opportunity not only to move to the cloud or hybrid architectures, but also to simplify their IT landscape at the same time, which in turn reduces overall costs.

Current surveys by the German-speaking SAP user group DSAG show that although the need for the S/4HANA switch is seen, there is still a certain reluctance – which is certainly also due to the turbulent and uncertain times. As of today, 14% of the companies surveyed are already using S/4HANA (2020: 10%) and another 39% are planning to migrate to it within the next 3 years. 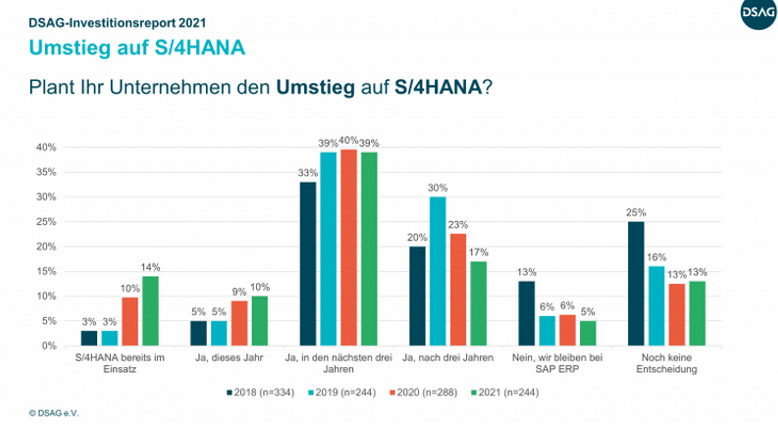 The switch to S/4HANA should be well planned

In order to be able to use the SAP S/4HANA Business Suite as the digital core of all corporate processes and thus as the basis for the digitization of your company, the changeover should be well planned.

There are various scenarios that lead to S/4HANA: Greenfield, Brownfield or even selective migration.

The Greenfield approach involves a complete new installation of the SAP S/4HANA system. The Brownfield approach is basically a software upgrade that preserves all previous data and settings. Selective migration, on the other hand, is a hybrid strategy of the two previous approaches, but based on Brownfield. The old system is copied without data and converted to S/4HANA. Then this empty system is filled with the legacy data via data migration.

SAP itself recommends the greenfield approach as a way of proceeding, but this elicits conflicting opinions from customers. On the one hand, because this requires a radical rebuild of the entire SAP environment, the extent of which is difficult to estimate in advance. On the other hand, it also means that investments made in the legacy system are not safeguarded. With the brownfield approach, on the other hand, this can be ensured through appropriate data migration.

In a conversion according to the brownfield strategy, it is possible to build on existing elements of the SAP environment as well as on systems that are connected to supplier and partner systems. The successive approach not only minimizes delays and disruptions, but the pace of migration can also be adapted to the available budget and business circumstances.

Third-party systems and interfaces must not be neglected

But as a CRM provider, we don’t really have anything to do with the migration scenarios to S/4HANA, you’re probably thinking now. Yes and no. We are certainly not a transformation partner who is carrying out the migration from ECC to S/4HANA at your company. Nevertheless, our CRM system is also affected by the changeover.

Some technical changes are taking place in the system as a result of the S/4HANA migration. Some functions, tables and structures no longer exist, others are newly added (e.g. sales contacts (CAS Contacts), business partners/business partners, etc.). The database technology changes and is now an in memory database. These technological changes naturally also affect the components of the itmX crm suite and thus lead to necessary adjustments.

Due to the discontinuation of SAP ECC by SAP, a conversion to S/4HANA will be mandatory in the next few years. During the conversion of itmX CRM to S/4HANA, we will of course support you and offer you best practices with appropriate migration paths and corresponding toolset for your conversion from itmX crm ECC to the S/4HANA edition, regardless of which S/4HANA approach you choose.

The decision for a brownfield approach, greenfield approach or a middle ground for your S/4HANA conversion also plays a decisive role for us. Therefore, please involve our experts in the planning and implementation strategy at an early stage in order to clarify any questions that may arise at an early stage.