The SAP world is in a state of upheaval. Since the Walldorf-based company ushered in a completely new era for its applications in 2015 with SAP S/4HANA, the successor to its previous core product, many companies have been faced with the question of how and, above all, when to make the switch to the new technology.

A core application of SAP ERP is the CRM component, and this will only be supported in its current version 7.0 until 2027. In the optional extended maintenance until 2030. But at the latest then the question arises for today’s users: what to do with the SAP CRM?

In our three-part blog series, Michael Stump, Managing Director and SAP CRM expert at itmX GmbH, will show you the pros and cons of SAP’s own CRM solution and at the same time inform you about alternatives.

SAP CRM on Premise in SAP Business Suite version 7 is still one of the most widely used CRM systems in the SAP universe.

Most companies use it mainly to cover sales processes such as opportunity management, visit reporting and quoting. However, the system can also be used in marketing. Using the so-called segment screens, it is possible to plan and handle marketing campaigns.

In recent years, however, SAP has pursued few if any further developments of the classic SAP CRM on Premise. This is because SAP’s future lies in S/4HANA Customer Management – an add-on that builds on S/4HANA and whose greatest advantage is integration without middleware.

One reason for this is the cloud-first strategy that SAP has heralded with S/4HANA. On the other hand, this is also due to the fact that modern CRM requirements, such as the use of collaboration tools for internal collaboration, the integration of social media or smart mobile clients cannot be implemented with SAP CRM.

Nevertheless, many customers have decided to continue operating the system for the time being. Of course, this is also due to the fact that expensive and complex interfaces have been developed over the years to dock with SAP ECC, but also to the fact that SAP has long announced an integrated version of SAP CRM under SAP S/4.

SAP CRM is now really to be found in the core of S/4, under the name S/4 HANA Customer Management. With this development, SAP is pursuing the path that once made SAP so successful: it delivers a system that maps integrated processes. In this case, SAP offers the customer a process that starts with lead generation, integrates opportunity management, and maps the process through quotation and order management, consistently through to billing.

For this, SAP combines the best of two worlds under the Business Partner. 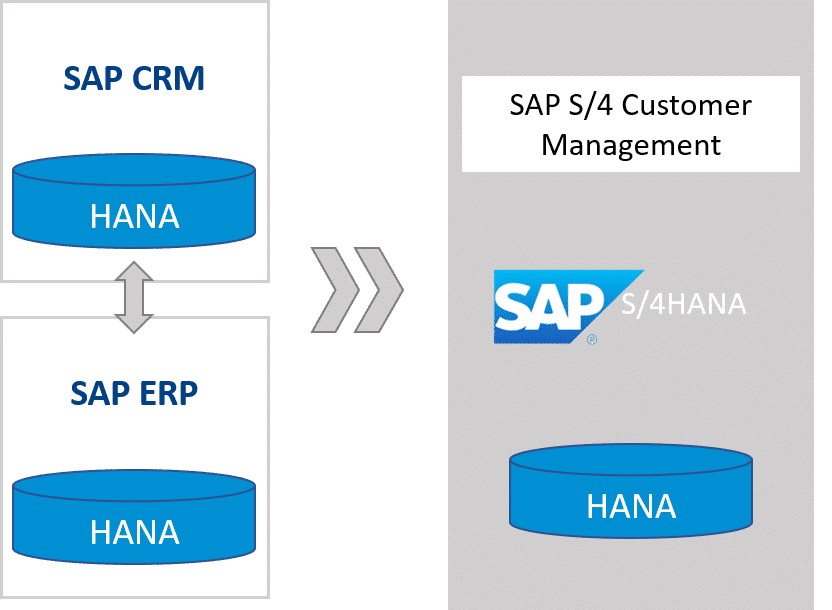 With the installation of Customer Management on S/4 HANA, all information and processes that have relevance in customer relationship management become part of the HANA database schema and the duplicate data management that once existed between ERP and CRM becomes obsolete.

For the system managers, this represents a huge added value. When switching to S/4, the SAP CRM data is not only relatively easy to migrate. The infrastructure also becomes much simpler, as the interface between the systems is eliminated.

But what does that mean for users? We’ll address this very topic in the next part of our three-part blog series. Stay tuned for that.

You have SAP CRM in use and are still undecided how to proceed? We would be happy to show you a CRM alternative in a free web session that is fully integrated with SAP and, above all, interface-free and can map all your processes in marketing, sales and service. Are you interested? Then contact us and we will arrange an appointment to discuss your individual needs.

Read also the other parts of our blog series

Part 2 of the blog series

Read part 2 of the blog series

Is there an alternative to SAP CRM that does not require interfaces and delivers full CRM functionalities?

Part 3 of the blog series

S/4 Customer Management does not offer a completely interface-free solution, since you have to fall back on additional cloud solutions that require a connection via interface. Read the last part to find out whether there is a real alternative to SAP.